The goal that this professional dancer has set herself is that young people with Down syndrome, autism and other conditions find in dance a way to express themselves, feel free and socialise.

Mía Noel is, above all, a social entrepreneur. Economist and dancer, she cannot picture her life without helping others, as she learned from Vania Masías ⸺the administrator and dancer who founded D1, a cultural association and dance school oriented to social transformation. Inspired by her, Mía is doing her part too, and together with Alejandra Valera created “Ser Parte” (Be Part), which holds free dance workshops every Friday ⸺from 3:00 pm to 4:30 pm⸺ to young people with different skills who want to feel free. Classes are taught by the colleagues of these professional dancers, all top teachers who generously give their time and energy to promote i equality of opportunities and build a better future for our country.

How did Ser Parte begin? What was the spark?

I dance at D1 from the age of 14; here the social aspect is well developed because dance not only teaches you to move, but also changes you as a person. In 2012, after going through a very beautiful process, I felt the need to share what I had received. I began to do some research about social projects that had to do with dance and art; and also about people to work with. I thought about Special Olympics, people with cancer... I wrote to several organisations to put together a pilot intervention project, and the first to answer was Special Olympics. That is how it started; after a trip to New York, I said, “I have to do something for my country with all that I know”.

I do not know (laughs)... Social responsibility is in me. I always say, “If I'm so happy with what I do, why not share it?” Why not make an impact on the people around me? Many people live and work on things they do not like just because they have to pay bills; but I am lucky enough to love what I do, I am passionate about this and I pay my bills! So why not share it?

How did Alejandra show up in the story?

Ale is my best friend, and I could not do this alone. Also, she is a psychologist.

You met while dancing.

Yes, at D1. I had this idea, but I lacked information. There was not too much information about dance and young people with different skills, and that also attracted me: to generate information, to make a study of this, to see the impact we had on the kids; and having a small group ⸺because at the beginning they were fifteen⸺ we could see how they were improving.

How long did it take you to make your proposal come true?

One month. It was super fast!

How was the first class?

Your first students were members of Special Olympics.

Yes. They did sports, had some discipline and knew how to work in a team, with a teacher. It was a slightly easier scenario. We met those fifteen guys and the first class was spectacular! They were so spontaneous and free. You could see at once if they liked the class or not, and that ⸺for a teacher⸺ is a challenge, because in a normal class you do not meet with people so sincere. It is something else! Everything here is transparent. If they get distracted you evaluate which techniques to use to get their attention back, so they can repeat the steps and really connect with you. As a teacher, this forces you to rethink a lot of things.

The next step was to have an open space for more students.

That happened after one year and a half. Until then we had only one group that had to change every three months, but every time we would get so fond that it was hard to say goodbye. "No, stay!" (Laughs)... We decided to turn it into an open space because some were not regular and the premise here was that you can't skip classes; otherwise, the study we wanted to do was not going to work. That is why we open it.

What was the result of your study?

Some of the students were not regular, so we could not complete it. But they improved their social skills. A very clear example was this girl who at first did not socialise or interact. She practiced rhythmic gymnastics, but she trained and competed alone. At the end of the class we have freestyle, that is, we play music and make a circle, and one by one they dance in the middle. While most people would feel embarrassed, they, being so spontaneous, would “fight” to be the next to dance!

And what about her?

Carlita did not want to dance. Ever! She would always cry.

How old was she?

Between 14 and 16, but in the fourth class she danced in the circle. Ale and I wanted to cry (laughs)… Through these little details you can see that what we offer to them is useful, that they are improving, socialising...

Their parents write on the Ser Parte Facebook page to express their happiness, the enormous appreciation for the work you do.

It is amazing. While we do not talk to them face to face ⸺because another of our goals is to detach them from their parents during classes⸺ we do receive their affection. It is an indicator of what we are doing.

You have this premises at your disposal.

Yes, D1 has opened its doors to us totally.

It is not surprising, since D1 is the result of the work done by Vania Masías, an entrepreneur who, having it all to live easily, chose social work, chose the hard way. Did that have an impact on you?

Totally. If I had not met Vania, my approach to dance would be different. It would have been quite egocentric, because that is one of the ways you can take. But there is another, based on sharing: to be a teacher, to create projects, which is what she has instilled in us: to use what we know to share it! She has created leaders, because many of us have our own projects and D1 supports us in any way it can. In our case, with the premises (where they carry out the workshops).

D1 should be one of the few spaces in the country where racism does not exist.

In a dance hall, your value is not about how much you have, whether you are a woman or a man or what colour you are; here you are measured by your talent! That is all.

“In a dance hall, your value is not about how much you have, whether you are a woman or a man or what colour you are, here you are measured by your talent!”

How has that influenced you?
I am a much more sensitive person. As part of this wonderful world, which is not so real, I want it to be real! I want people around me to enjoy what I enjoy, to build a better world through dance, art or whatever. That is what I want.

You are a happy person, are you not?
Super happy! (Laughs)

So that which many consider unreal is possible.
Happiness is an option. You can be happy with what you have, but you have to focus on the positive and enjoy it.

Evidence of it is that you created Ser Parte to give and ended up receiving a lot.
A lot! The greatest part is that our Fridays are about love. You may have had a stressful week, but you come here and they welcome you with a smile that changes you and fills you with energy, love, with everything! Your perspective changes. You realise that you can be who you want to be, you just have to leave your prejudice behind.

So you are making the country a better place.
Totally! 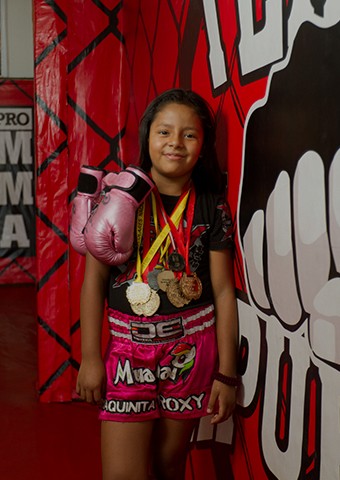