In the world of kickboxing, she is known as “Maquinita” (Little Machine). She won her first tournament at the age of four and, at school, she is a responsible student. Martial arts have helped her be disciplined. Her dad is her coach.

Roxy’s life story shows what can be achieved when there is equality of opportunities. At only ten years old, she has dominated a sport that many believe is only for men. Roxy does not like candies, she prefers raw carrots. On Roxy’s shorts, there is a picture of Rainbow Dash, the athletic pony. She is just a regular little girl; however, on the tatami, her legs fly and her fists go directly to the target, but she remains calm. She trains all the time with her dad and coach, Carlos Apuela, in the martial school he leads. We had a conversation with her and her dad about the importance of promoting equality of opportunities.

When you were four years old, you participated in your first tournament.

All your opponents were boys.

Some of them were. My first opponent was five.

How could you not be afraid?

I was already used to it (smiles)… I always wanted to do this. I liked coming out (since she was two years old, she used to come to the tatami at her father’s martial arts school) and sit and see everything they were doing.

Do you remember your first fight?

Yes. I was nervous at the beginning, but then I became confident.

Before you was a boy that was 6 inches taller than you.

Everybody thought you were going to lose.

What do you feel when you win?

(Silence)… It feels like… how can I put it? I cannot explain it.

How many medals do you have?

How many medals do you have from tournaments in which only boys participated?

Some people believe that this kind of sports are not for women.

That is not true. We have to make our own decisions and no one can tell us what to do.

No. At school no one messes with me.

There are always bullies who abuse the weak, what do you do when that happens?

I tell the principal without them knowing.

Oh! You prefer not to fight.

How could you explain that, if during a tournament you beat up your opponents!

(Laughs)… I do not like fighting everywhere I go. Never done it.

The way my dad trains me.

What do you mean?

I like it when he wears the pads so that I can punch him. That is how we train, as if we were fighting.

What is the best part of training with him?

That he teaches me and corrects me to be better.

She has a tattoo of you on his shoulder…

Yes, that means a lot to me.

What would you like to be in the future?

Your fighter nickname is “Little Machine”. Do you like it or do you like your name better?

In your diet, there is no room for candies. Is this sport too demanding?

In a fight with another girl, she ended up crying…

Yes. I only punched her softly to make points to win.

You talked to her later, what did you tell her?

I told her to calm down, that those things happen, and that someday she will win and I will lose.

How many fights have you lost?

Only two (she was disqualified for punching her opponent too hard).

She liked it because that was what I did. She was born and raised in this environment, at my school. You know, children absorb everything…

At what age did she start to practice it?

As she has always been here at the school, she started showing interest in the technique when she was only two years and a half. I would put my arm and she would lift her leg to do an armbar. People laughed because she looked very cute.

How did you decide to sign her up in a tournament when she was four, knowing that only 5-year-old boys would participate?

I trusted her. I knew everything would work out fine. I asked her if she wanted to do it and she said, “Yes, dad”. She had not even taken her things, she was wearing regular shorts, but she participated and won. When the fight is between a boy and a girl, they request the authorisation of the parent.

Some people believe kickboxing is not for women.

They do not know the sport. That is why schools should give more information about it.

How has this sport benefited your daughter?

It has given her discipline, organisation and concentration in what she does. She is a very mature girl for her age, and she is able to understand everything. The same happens at school. I do not have to tell her what to do, she does everything by her own.

In spite of what some people may think, Roxy does not like to fight.

Quite the opposite. She is very calm, she does not pick fights at school, and her classmates like her.

You are her coach and father, but right now forget about your role as a father and answer as her coach. How far do you think Roxy will go?

She has the conditions to achieve great things, to be a great athlete and an amazing coach. She has already proved it. When I put her in charge of a class (for children), she knows how to guide students, train them, prepare them physically, create circuits and techniques… She is serious and strict during class, but after it finishes, she starts playing.

As her father, how do you feel?

Very proud and happy! I know she will have a well-organised life and she will know how to choose her friends. Roxy is ready for life! 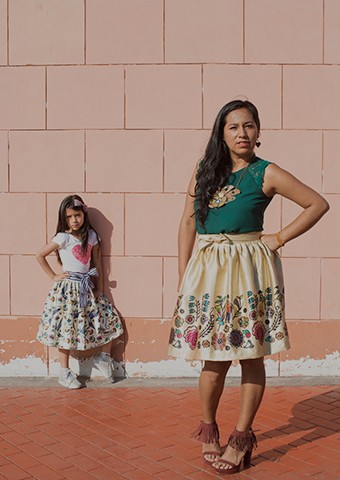