Today a public lighting maintenance engineer, Luis was 8 years old when his family moved to San Juan de Lurigancho. He still recalls that around his house there were cultivation lands and no electricity. Going from candles to electrical energy was decisive, as it improved his quality of life and that of his family; perhaps this is why Luis values ​​so much the work done by Enel: solving public lighting problems; which means giving neighbourhoods their electricity back.

Some 200 failures are reported each day through Fonocliente, 80% of which are dealt with within 24 hours. To reach this record, Luis has about 100 technicians who comb our concession area from end to end. What is the most frequent complaint? Lamps off.

Electrical engineer from UNI and father of Almendra and Mauricio, Luis has engraved in his memory the date he officially joined our company: 31 May 1996. “Being part of Enel is very important to me because of the work done for the people; public lighting helps to strengthen safety and offers comfort”.

Safety and comfort also enjoyed by his family, who lives in Los Olivos. On a day off, a few years ago, Luis was walking with his daughter when he ran into a team who was repairing public lighting wires. He asked her to wait and approached them. She followed him, saw him interact. Minutes later she asked what he had been doing and why ... With each answer, Dad felt electric power running through his veins. “I want to be an engineer too!” she said then, although now she is developing a passion for Administration. “Time will tell”, he says. 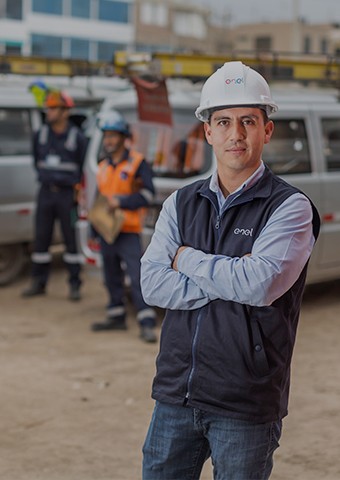