It is not a secret that the Peruvian Police does not have much prestige, however, this superintendent has empowered the people under his charge and, with the support of the community, order and harmony are arriving to sometime chaotic areas of Zarate.

Through his work, the tireless major Alexis Luján has proved that is possible to bring safety to residents of Zarate’s neighbourhoods.

When the major Alexis Luján took the command of Zárate’s police station, located in the district of San Juan de Lurigancho, he was convinced things were about to change, as there were addicts, thieves and gangsters who kept residents uneasy for years. Four months later, Luján manages to renew Zárate’s image, by supporting social progress and social commitment among residents and improving their quality of life. Everything had changed so much that Alexis’ police station participated in a national contest named “My police station, my pride”, funded by the Ministry of Internal Affairs and a private enterprise, and it almost won the first place. How could the situation change so much in so little time? Luján tells us all about it on this interview…

In a country where citizens distrust the police, how did you manage to build trust in your community?

We took advantage of their desire of forming neighbourhood councils.  There are Citizen Participation Offices in all the Peruvian police stations; their job is to connect police stations with neighbourhood councils. In our jurisdiction, there are 26 neighbourhood councils; our work had to be better than that! We wanted to build a trusting relationship, show neighbours that we will support them if they need us. When I barely arrived, for example, I ordered to print three thousand presentation cards (of Zárate’s police station) so that every member of the police staff could give them when patrolling by foot or motorbike. When people started calling those telephones, we answered all the calls. Once we gained their trust, we approached to them and helped them organise better. The most representative case was the Micaela Bastidas Park, where neighbours wanted to buy security devices…

What was the problem in that park?

It is located near an avenue with night clubs and karaoke bars, and almost always on weekends the parties ended up in the park. People would drink alcohol and do drugs all night long. Neighbours were sick of it. We used to go to support them, but we could not be there all the time. That is how the idea of buying security devices came up: cameras, remote alarms, deterrents… Now, they even have reflectors that light up all the park! We had meetings with them, gave them ideas to generate resources on their own and supported them with patrol cars so that they and the security guards feel safer. Since then, more neighbours trust us.

You took advantage of the community’s need…

We catalysed it. Sometime after that, they had funds. They bought one camera, then another one, and so on. Now they have nine!

You assumed the command of this police station only four months ago and you have already accomplished this improvement.

Yes. And, as the Police of Lima Region gave us alarms for the most proactive neighbourhood councils, we gave them two.

“People would drink alcohol and do drugs all night long. Neighbours were sick of it. We used to go to support them, but we could not be there all the time. That is how the idea of buying security devices came up”

Why did you decide to become a policeman?

My father had a great dedication to service. I remember that he when he was a Physical Education teacher took a course for lifeguards. He became a voluntary lifeguard; I used to see him in action. When I graduated from the Police, the first course I took was for becoming a lifeguard. I am following my father’s example.

Nevertheless, the Police does not have such a good image. It is related to corruption.

I have always believed in the Police. I joined it in 1984, in the middle of terrorism; I was willing to serve despite all the vicissitudes.

I understand your stubbornness comes from home. Both of your parents were teachers, which is another underestimated profession.

Exactly, I like serving people! I always wanted to be a policeman due to my desire to serve and be useful to society.

A decade ago, in Salamanca’s police station, you had under your charge a nursery that was about to collapse.

Yes, we had capacity for six babies and believe it or not we had sixteen. We could not continue like that! There was not enough milk. We got the media’s attention, since a baby in need always attracts it. We resorted to that and we got help not only for breastfed babies but also for all the minors.

There were babies that had been abandoned in rubbish dumps.

Breastfed babies! They were abandoned in the rubbish, markets and on the streets.

And, one more time, your work broke the cold image the Police had.

All our effort was focused on providing that service. If we hadn’t, where could we have obtained the milk from? INABIF (National Institution for Family Welfare) was supporting us but their help was not enough. That is why we took advantage of the media’s interest. We asked for help and many people started contributing.

Achievements like that one counter the loss of prestige of your institution.

I am only complying with my job.

And you are not alone. You have found allies throughout your career.

Exactly. There are good staff members in the Police, like my staff in the Citizen Participation Office; they enjoy this job and support me.

“I am following my father’s example”

Zárate is located in one of the districts with more crimes. How did you find ideal staff members to carry out this work?

By chance, I assumed the command just when a pilot plan had begun in the district, which consisted in boosting police stations. Fifty policemen and four patrol cars were added to the station. They were new staff members to whom I could teach how to treat citizens, what means dedication to service and how to establish a trusting relationship with citizens.

You were teaching just like your parents did in classrooms.

Exactly! We started a training period with those staff members and obtained good results thanks to the presentation cards and our good assistance to citizens. However, everything would have fallen apart, if we had not answered to the neighbourhoods’ needs; we did not let them down. After this successful experience, other neighbourhood councils wanted to follow the example. That means the work is being carried out.

Principally, everything is going alright because you kept your word.

Yes. First, we had to establish a trusting relationship, prove people that we were doing our job; then, we had to encourage them to buy security devices. For example, in Campoy, we thought about what they could do to obtain resources on their own. As there were many people working in restaurants and markets, we came up with the idea of organising “Misturitas” (smaller version of the Mistura Food Festival). Every Sunday, the police station arranged a sunshade on the park, and neighbours took their dishes there. That is how they generated resources. And now they have fences and cameras.

But people could say that that is not the work of a police station.

Yes, however, in the areas we intervened like that, the number of crimes decreased almost to zero. We have recovered those places, and now we can focus in other sectors.

You have empowered people so they can defend their neighbourhood.

Now, they are well-empowered. They help each other, they have whistles, alarms, security devices that help them, but, anyway, the best support is the police. We advise neighbours to be careful, because there are racketeers in this area. They analyse the situation and, if they cannot control it by themselves, they call us and we arrive immediately.

“Everything would have fallen apart, if we had not answered to the neighbourhoods’ needs; we did not let them down”

These achievements led you to participate in “My Police Station, My Pride” contest.

Of course, because the contest was oriented to strategies and innovative ideas. That was what it encouraged me! The judges came, visited the neighbourhood councils and we became one of the nine finalists. I got very surprised when I realized we were the only police station from Lima. We won the second place.

How has your community responded?

Well, they are very happy. A week later, we gave another alarm to the neighbourhood council of the Micaela Bastidas Park. And talking about the prize, we made a ceremony with the network of volunteers⸺ that is how we call the groups of security guards, which, in that case, were formal tuk tuk drivers. They asked us for our support to eliminate informal drivers and we asked them to help us identify the areas where people get stolen more frequently or where drugs are sold… We have put a sticker on the tuk tuks and we gave them our presentation cards so they can call us. We support each other.

And now there are more allies.

Yes. In that ceremony, we also recognised the work of the neighbourhood council.

When you told your parents that you wanted to be a policeman, terrorism has already started. What was their reaction?

One year before I joined the police, my father passed away, so he never knew about that. When I told my mother, she agreed with my decision. However, she thought I was not going to like the military formation, but I did like it from the very first day! I am proud of being a policeman. 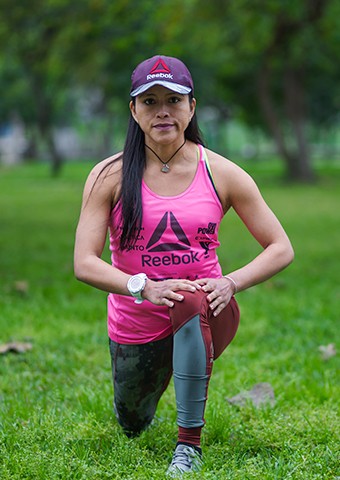