The Lima Art Museum (MALI) and Enel Perú invite the general public to participate in the ENEL Week’s ninth edition, one of the most anticipated events of the year. The event will take place from July 21 to July 30 and offer free cultural activities.

Under the theme “10 días para explorar” (10 Days to Explore), the ENEL Week will be a meeting point for adults and children to imagine, create, innovate and be surprised by art through all the activities offered by the programme.

For ten days, attendees will have FREE access to MALI and will be able to make guided tours (from 11 a. m. to 6 p. m.) to see the great Nasca exhibition. The ENEL Week will hold several activities about this enigmatic and fascinating pre-Hispanic culture, for both children and adults. From 12 p. m. to 5 p. m., there will be creative and educational workshops to motivate learning through games. Participants will take part in the “Soy una Deidad Nasca” (I’m a Nasca Deity) workshop, inspired by Nasca mythical anthropomorphic gods, and they will create their own Nasca tiaras, trumpets and nose ornaments. In addition, there will be a workshop called “Nasca Pop!” to design and print iconography inspired by Elena Izcue’s work.

On the other hand, the museum’s atrium will be the scenario of an outdoor art intervention every day of the event (from 12 p. m. to 5 p. m.); attendees will unleash their creativity by painting and colouring images of Nasca characters on a large scale. All the ENEL Week attendees will also be able to take pictures at the Vive Nasca station, travel in time wearing “unkus” (Nasca shirts) and pose in an environment that recreates the arid desert of the Peruvian south coast.

On Friday 21, the “El mundo desde abajo” (The world from below) workshop will be held (from 10:30 a. m. to 12 m.) as part of the “La lectura es mi Norte” (Reading Is My North) Festival by writer and illustrator Roger Mello. He will make a collective mural with the help of invited artists and visitors.

For its part, the AFP Integra Auditorium will present a film and theatre festival, with free films for all ages and family plays. Theatre tickets for adults will be offered at affordable prices.

As a special activity, the ENEL Night will take place on Friday, July 28, with extended hours until 10 p. m., night visits to the museum and musical performances by Altiplano, narrator Carmen Pachas and the band El Polen.

In addition, attendees will be able to tour the permanent exhibition, which has more than 1,200 pieces narrating 3,000 years of history of Peruvian art, from pre-Columbian to modern. During these days, the MALI Itinerary will be opened (from 10 a. m. to 11 a. m. and from 6 a. m. to 7 p. m.), a self-guided tour highlighting a series of works from the collection related to “art and innovation”.

All experiences can be shared on social networks using the #SemanaEnel hashtag.

Through this project, ENEL seeks to promote access to culture and art, having as an ally one of the most important museums in Latin America: MALI.

General public will also be able to see and ride Enel Peru’s electric bikes. This means of transport is being promoted by Enel to involve participants in the fight against climate change in a fun way. For this purpose, Enel will implement a special track for those who would like to try the bikes, from Friday 21 to Sunday 30, from 11 a. m. to 5 p. m.

·         Nasca: The largest exhibition dedicated to this fascinating and enigmatic pre-Hispanic culture that tells the story of the ancient Peruvians who populated the basin of the Grande River, in Nasca, two thousand years ago. It will be open to the public until October 1, 2017 in MALI’s temporary rooms 1, 2, 3 and 4.

Under the curatorship of Cecilia Pardo (MALI) and Peter Fux (Rietberg Museum), this exhibition will allow visitors to have a unique experience by seeing for the first time a representative selection of 300 pieces, including ceramics, textiles and metal objects. They will be presented alongside innovative technological resources such as videos, projections, animations, musical compositions, mapping and 3D simulation.

Visitors to MALI will be able to participate in different guided tours to learn about some art pieces from the permanent exhibition room and the great Nasca exhibition.

It is a self-guided tour of the permanent exhibition. On this occasion, works have been chosen under the “innovation and art” theme. This activity will take place in the hours in which there are no guided tours.

The theme of the workshops will revolve around the great Nasca exhibition.

“Soy una Deidad NASCA” (I’m a Nasca Deity): A workshop composed by several stations in which participants will assemble the necessary elements to become the representation of a Nasca mythical anthropomorphic god.

·      Station 1 - “La Nariguera” (The Nose Ornament): In this workshop, people will learn about the meaning and use of the Nasca nose ornaments and will be able to assemble and decorate their own with natural symbols.

·      Station 2 - “La Diadema” (The Tiara): In this workshop, people will learn about the meaning of the Nasca tiara as a symbol of power.

·      Station 3 - “La Trompeta” (The Trumpet): In this workshop, participants will decorate and assemble a replica of a Nasca trumpet, with characters and symbols related to their own musical tastes.

There will be 28 free showings with films for all ages. The delivery of tickets will be made at the entrance to the auditorium before each showing. This activity is carried out in collaboration with the PUCP Film Library.

On Saturday 22 and 29 and Sunday 23 and 30, the family play “Corali, la niña del mar” (Corali, the child of the sea) will be presented for FREE at 4:00 p. m. This play tells the story of a girl who comes from the sea and who, at the age of 10, faces two questions she wants to answer: what is her origin and what is her purpose in life. With the help of a star, she will embark on a journey to discover the answers.

On the same days, the auditorium will stage at 7:00 p. m. the play “Un gusto pasajero” (A Fleeting Love), at an affordable price (S/ 15). Through this staging, two actors present us with four absurd, unusual and funny stories that project love in its different stages. Tickets on sale at the MALI ticket office and at Teleticket.

As special activities, a concert by Altiplano will be held at 8:00 p. m., along with narrator Carmen Pachas, and another by band El Polen will take place at 9:00 p. m. 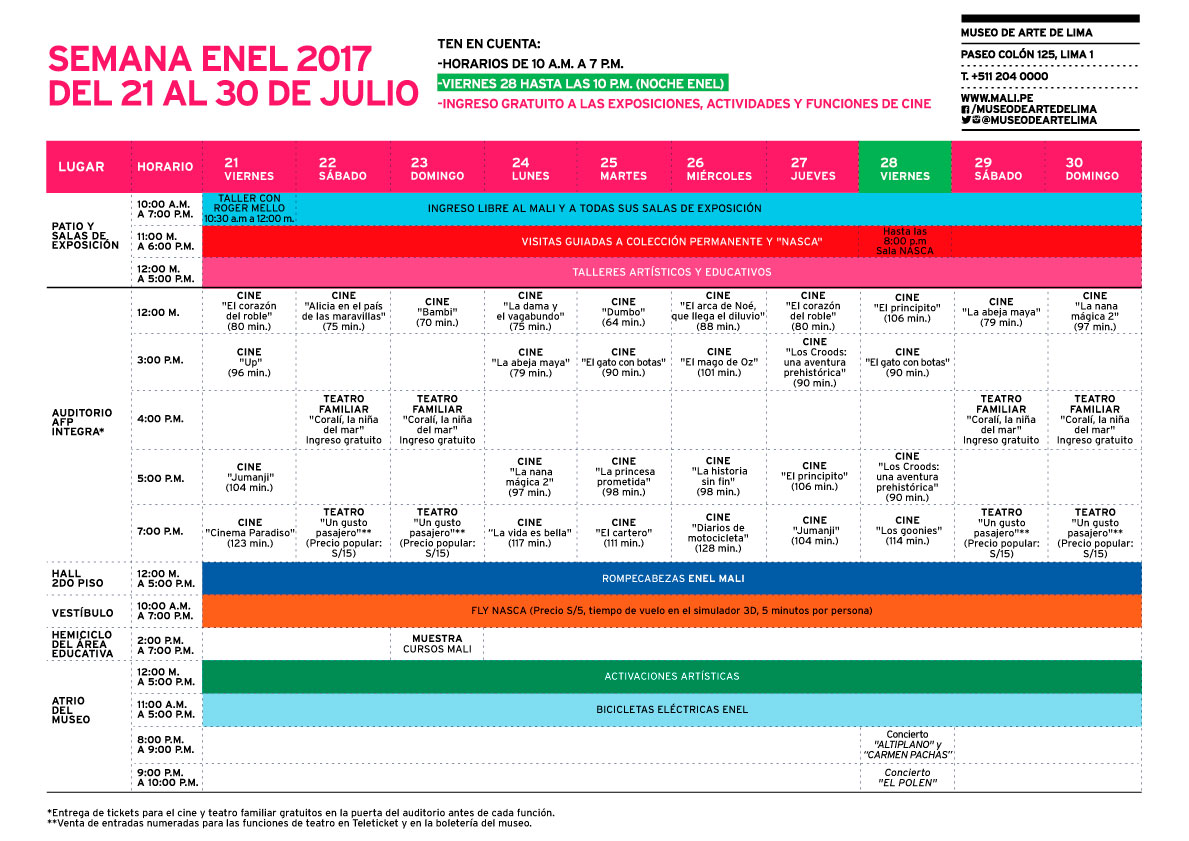 Enel S.p.A. provides for the dissemination to the public of regulated information by using SDIR NIS, managed by BIt Market Services, a London Stock Exchange Group's company, with registered office at Milan, Piazza degli Affari, 6. For the storage of regulated information made available to the public, Enel S.p.A. has adhered, as from July 1st, 2015 to the authorized mechanism denominated “NIS-Storage”, available at the address www.emarketstorage.com, managed by the above mentioned BIt Market Services S.p.A. and authorized by CONSOB with the resolution No. 19067 of November 19th, 2014. From May 19th 2014 to June 30th 2015 Enel S.p.A. used the authorized mechanism for the storage of regulated information denominated “1Info”, available at the address www.1info.it, managed by Computershare S.p.A. with registered office in Milan and authorized by CONSOB with resolution No. 18852 of April 9th, 2014